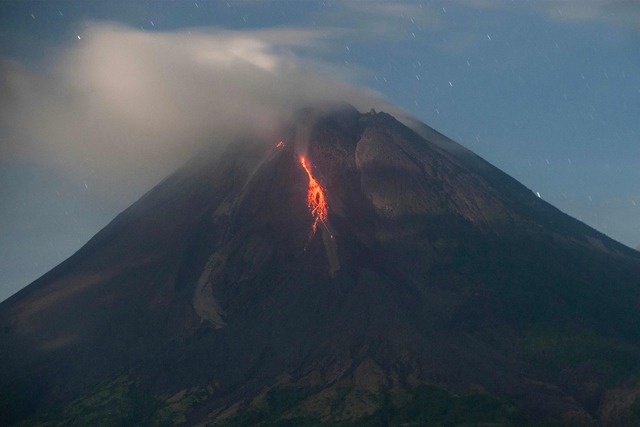 Yogyakarta, Indonesia. Indonesia’s most volatile volcano registered new eruptions on Saturday, spewing a cloud of ash, as well as rivers of lava and solid materials down its slopes. There is no report of victims.

An avalanche of rocks tumbled down the slopes of Mount Merapi before sunrise and hot ash clouds rose up to 200 meters (656 feet) as the mountain cracked and rumbled, said Hanik Humaida, head of the Center for Risk Reduction in Volcanology and Geology.

The volcano released hot clouds of ash at least eight times since early morning, as well as a series of pyroclastic flows – a mix of rocks, solid materials, lava, and gases – that had spread for about two kilometers (1.2 miles). up its slopes, Humaida said.

The 2,968-meter (9,737-foot) high volcano sits on the densely populated island of Java near the historic city of Yogyakarta. It is the most active of a dozen Indonesian volcanoes and has recently seen constant eruptions.

The Indonesian Geology and Volcanology Risk Reduction Center has warned the population living on the slopes of Merapi to stay at least five kilometers (3.1 miles) away from its crater and to be alert to the risks of lava.

Indonesia, an archipelago of 270 million people, is located along the Pacific Ring of Fire, an area along the ocean fringe prone to earthquakes and volcanic activity.