Regardless of size or shape, your nose may have a significant influence on your appearance and self-esteem. Because our noses are placed in the center of our face anatomy, they are typically the first facial feature that people notice. As a result, determining which of the various varieties of nose shapes is the most attractive has become a real challenge in today’s culture.

Experts were able to identify one type of beauty from another due to the ongoing alterations in our perception of beauty. Knowing about numerous sorts of nose forms is one thing; determining your own is quite another. Do you know which of these personalities you are? First, let’s start investigating.

With highly experienced surgeons, modern clinics, and affordable costs, Iran offers everything you need for a safe and effective rhinoplasty. Moreover, Iran is a beautiful country with excellent culture and people. It is also well-known for its rhinoplasty, which is called “nose jobs” in Iran. Check out the videos of our rhinoplasty patients who had their nose job done in Iran to see why Iran is such a good country for your nose job.

Iranian cosmetic surgeons use these terms to describe the results of nose surgery more clearly. It is common for Iranian girls to prefer having a natural nose to hide their nose surgeries and keep their face as natural as possible. Other Iranians prefer to have a nose that is upward-shaped, more like a Barbie doll.

Undoubtedly, Iranian nose surgeons are the best rhinoplasty surgeons in the world; they can do anything physically possible to your nose! Tehran, the world’s nose job capital, is home to the world’s best Iranian nose doctors!

Why Do People Have Different Nose Shapes?

There are many different types of noses, each with its unique set of bone structures, cavity sizes, and cartilage production. Because our nose is the most distinguishable feature on our face, its shape and appearance will undoubtedly impact our overall attractiveness. But have you ever thought about why we all have different nose shapes?

Several studies have found that principles relating to human evolution, survival, and genetics explain why our nose shape differs. It is also based on the notion of genetic drift. The genetic drift evolutionary approaches explain how human adaptability affects changes in our appearance.

Other factors also contribute to observable disparities between populations. For example, researchers have established correlations between nose measurements and climate. People with larger noses were more likely to live in tropical and humid climates. Those with narrower noses, on the other hand, thrived in cold and dry areas.

What Kinds of Nose Shapes Are There?

Assume you want to change the form of your nose. In that scenario, determining your nose type is essential in order to choose the finest solutions. The size of your nostrils, the shape of your nasal bones, and the cartilages in your nose may all tell you which kind you have.

To assist you in determining your nose shape, the following are the most common forms to watch out for:

This nose form, often known as the Greek nose, is popular among many people. It is difficult to dispute that a Greek nose is appealing due to its well-structured and nicely crafted bridge. Greek noses lack any type of curvature or humps, giving the wearer a fashionable image. Many individuals desire this style of the nose since it has tiny holes, making it popular among female models.

An aquiline nose, often known as a Roman nose, has a broad bridge and a somewhat curving look. The Roman nose is frequently compared to the slightly curled beaks of eagles. This sort of nose was sought after in the early European age because it indicates beauty and nobility.

A bulbous nose is distinguished by a bony ball on the lower section of the nose. This kind is more common in men, and it has a characteristic shape that looks to be inflated. A bulbous nose can occasionally be caused by abnormal cartilage formation in the nose. It is recognized; however, those genetics have a factor in why someone gets it.

A Nubian nose is characterized by an enormous nose and a broad base. This nose form is more common among people of African descent and other ethnic backgrounds. People with Nubian noses have recently sought procedures to reduce their nostrils, which is a popular approach to characterize and refine their looks.

The most common form of the nose both for males and females is a fleshy nose. A fleshy nose is characterized by a fleshy arched tip and weak cartilages. It is further distinguished by its large projecting shape. It is also known colloquially as Einstein’s nose due to its similarity to the great Albert Einstein’s.

Because of its short and stubby shape, the snub nose is sometimes compared to an upturned nose. A snub nose, on the other hand, looks exactly like a snubbed-nose revolver, as the name says. Unlike a heavenly nose, it lacks a distinct buttoned appearance. An upturned nose, in contrast to both varieties, has a more pointed and rounder shape. A snubbed nose, on the other hand, seems rounder and smoother, with only a small upward rise to its tip.

A hawk nose, as the name implies, is closely connected to a hawk’s bent beak. It resembles a projecting nasal bridge that arches across the central section. One disadvantage of having a hawk nose is that it might cause serious respiratory problems. Furthermore, because the middle section of the bridge is sinking downwards, the cartilage and bone structure may restrict airflow.

This type of nose shape, sometimes known as a celestial nose, is one of the most beautiful of all. The epithet “celestial nose” refers to the nose’s likeness to that of Querubin angels. While having an upturned nose is desired by many, experts consider this nose shape to be a mild kind of abnormality.

A slight dent runs across the bridge of an upturned nose as it protrudes towards the end. This little depression is a kind of undeveloped cartilage. Nonetheless, a tilted nose isn’t caused by alarm in terms of health. There is nothing to be concerned about until the structure interferes with your breathing. Furthermore, if your upturned nose shape bothers you, there are several surgical and nonsurgical options accessible.

A bumpy nose is defined by a pronounced curvature or a minor dip on its bridge. Individuals with this sort of nose are the most common candidates for rhinoplasty. Fixing a rough nose is a simple procedure for surgeons. In comparison to other approaches such as slimming and broadening, treatments are limited and less intrusive.

Is It Important to Have a Different Shape of the Nose?

Besides attractiveness, our nose shape plays the most important role in the process of breathing. The task of our nose goes beyond inhaling and smelling. Our nose, in fact, has been scientifically demonstrated to be useful in managing air levels.

It is critical in air regulation to maintain balanced levels of temperature and humidity. It helps to keep the air warm and wet before entering the lungs. It also aids in the removal of microorganisms and allergens from our respiratory tract. According to one research, by the time air reaches the bottom of our throat, our nose can filter it to a pretty close moisture level.

Is It Possible to Change the Shape of My Nose?

Some people are fortunate to be born with a very well-refined nose, while others are not. If you are one of the latter, you may do a multitude of activities to enhance the contour of your nose. Many exercises claim to change the shape of your nose. However, there is no evidence that these are beneficial.

If you wish to change the shape of your nose, cosmetic doctors recommend injecting hyaluronic acid-containing dermal fillers. This therapy alters the structure of your nose by putting semi-permanent liquid beneath the skin. Rhinoplasty, on the other hand, is a surgical technique that rebuilds the fractures and cartilages of the nose. This procedure has more striking and long-lasting results.

Is a Nose Job Right for Me?

When considering whether or not to undergo a nose operation, there are no absolutes. What is most important is what you feel will be ideal for yourself. If your current nose shape is interfering with your pride and self-confidence, getting a nose operation may be a possible alternative.

A nose job could be either surgical or non-invasive in nature. However, even the smallest modification can improve your whole appearance. So, if you want to get the most out of your nose operation, chat to your doctor about your expectations. Your surgeon will help you visualize these traits and attributes and will provide nose reshaping choices that are appropriate for your face shape.

Get the beautiful nose shape you’ve always loved with CarefulTrip, your best alternative for a better nasal structure. We have you prepared whether you have been injured or merely like to improve your appearance. Our staff is made up of only the greatest and smartest rhinoplasty surgeons that are eager to help you achieve your aesthetic objectives. 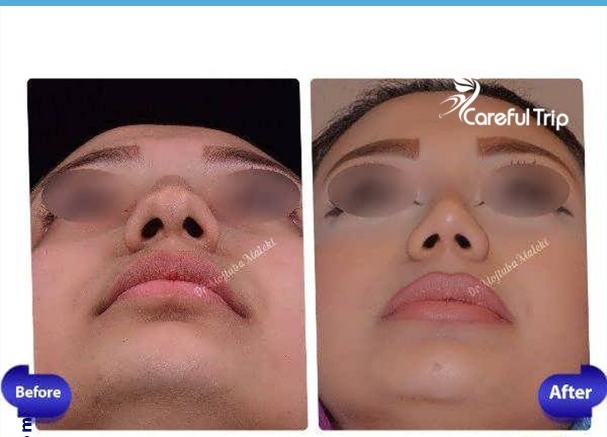 What Changes Are Possible?

In Iran, nose jobs are performed to achieve a variety of objectives, depending on the demands of the patient. Skin, cartilage, and bone can all be used to remodel your nasal structures. The operation might result in:

Corrections to injuries, such as restoring the symmetry of the nose

The majority of surgical operations are determined by the individual and the approach used by the surgeon. Although the classification is the same, the technique is always dictated by the patient’s desired goal and anatomy. In Iran, nose jobs can be classified into the following categories. The first two operations are the most important, and the others expand upon those.

Iran’s nose job professional incises the exterior skin between the nostrils to provide access to the inside nose during open rhinoplasty. Because your surgeon has access to the complete nasal structure, he or she has more leeway in reshaping it. Many people are uncomfortable with the prospect of having incisions on their noses, but surgeons go to great lengths to reduce scarring so that it is not visible.

The doctor cuts openings from within the nostrils throughout a closed rhinoplasty so that the scars are not apparent to others. This type of nose job surgery is appropriate for individuals who do not need sophisticated straightening of the lower regions of the nose or work on the nasal tip.

Tip plasty is only performed to alter the nose’s tip. If you want to modify the bridge of your nose, you can’t just tip plasty. This technique might be open or closed.

Because rhinoplasty surgery is so difficult, some initial operations may need tweaks, corrections, or alterations. In such a circumstance, a revision, also known as secondary rhinoplasty, may be required. Depending on the predicted new aim, the procedure might be open or closed.

This is perhaps the least invasive rhinoplasty treatment, in which a surgeon injects filler into the nose to reshape it. Because there are no incisions or stitches, some people don’t even consider it surgery. The two primary drawbacks of this operation are that fillers do not stay as long as surgery and cannot reduce the size of the nose.

Carefultrip, the best center of Medical tourism in iran, an umbrella providing every patient with absolute medical care. A professional team consisting of experienced specialists and physicians who value patients’ health above all.

breast surgery in iran, is a procedure to reduce the size of breasts for aesthetic or medical reasons. This surgery, which is also called, reduction mammoplasty, is normally, classified as cosmetic surgery, although it can help reduce certain chronic pain. In fact, disproportionately large breasts (Breast hypertrophy) can put too much pressure on the neck, shoulder, and back. Over time, this condition gets painful and even can cause other health complications in these areas.