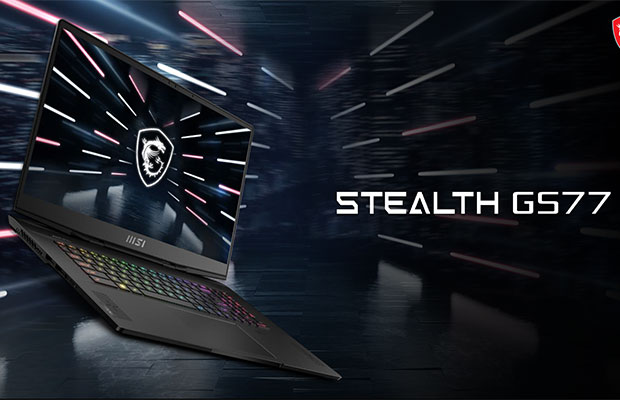 A classic of powerful gaming laptops that seek not to be a big hulk at the same time has not missed its appointment with Intel’s Alder Lake generation and has received its update dose to become the MSI Stealth GS77 12U suddenly.

This gigantic but stylish gaming laptop also picks up the gauntlet of the latest Nvidia graphics. Thanks to its varied configurations, it aspires to have a privileged place in the exciting market of the most radical gaming. Let’s see what it’s capable of.

MSI has left much room in its laptop to offer a wide range of ports that generally cover almost all the needs a user may face.

As we said, there is a rear area as a hub in which ports such as an HDMI 2.1, the Ethernet port, and the proprietary power connector are located.

Already on the sides, there is room for two USB 3.2 Gen2 type A ports, the headphone jack, and two USB-C ports, one Thunderbolt 4, that also supports charging the laptop. An SD card reader is also included on that right side.

Regarding the webcam, when we already assumed that we would have to talk about a mediocre model, we are delighted to tell you that the one included in this MSI Stealth GS77 is a model with FullHD resolution and its noise reduction system. Noise offers different quality and functionality that is not bad either in a laptop to play or in a computer that is perfectly prepared for more classic tasks in the workplace.
MSI makes it clear to other manufacturers that you can put a quality webcam in a classic situation and not give up privacy options for it

But the good news around the webcam of this MSI Stealth GS77 does not end here. The manufacturer has placed privacy protection in the form of a closure that we can activate from a switch on the laptop’s left side. Be careful because it is not a physical closure of the webcam but the disabling of it via software, which is also integrated into a function on the keyboard.

This element is a precise blow to many manufacturers, almost all the others, who insist on disregarding the webcam incorrectly, either due to low quality or privacy protection systems without much sense.

The MSI Stealth GS77 boasts a large screen for gaming, as it should be. No need to have a monitor, yes or yes. In this case, we are talking about a screen with a diagonal of 17.3 inches in which the frames are certainly not as small as we would like.

An essential bulk of the configuration options in the new Stealth GS77 family is on the screen, with three options to choose from at the resolution level. From a UHD panel to an FHD one, she is counting on the screen refresh as an inversely proportional counterpart.
Among the available screen, configurations are the most balanced: QHD with 240 Hz refresh. It is the one we have tested.

Our test model is the middle ground, having a QHD resolution and a panel with a 240 Hz refresh rate. The UHD option offers 120 Hz, while to enjoy 360 Hz refresh, you have to settle for a 1080p resolution.

The screen of the MSI Stealth GS77 has True Color technology from MSI itself, supporting different display modes that we can choose and tune via the application, as well as a personal calibration system.

Depending on the chosen resolution, we find different usage profiles. The analyzed model offers 100% DCI-P3 coverage, making it the most suitable for uses where we want greater color accuracy.

In the model we have analyzed, we highlight both the brightness, greater than 300 nits, and the contrast and good factory calibration, although, in our model (test and not for sale), a small light leak was noticeable in the corners of the screen. (backlight bleed).

The sound section of the MSI Stealth GS77 is also remarkable, both by numbers and by actual operation. We are talking about six DYNAUDIO speakers for a total of 6W of power, divided between those intended for bass reinforcement, which is very present, and the two front speakers.

MSI has not placed these speakers on the sides of the keyboard, but it has made a move by placing them at the ends of the touchpad.

Intel’s Alder Lake at the controls The renewal of the MSI Stealth GS77 could not leave aside the update to the new Intel processors for laptops, corresponding to the Alder Lake architecture (Intel Core 12th generation).

For the model we have analyzed, an intermediate processor such as the Core i7-12700H has been used, with 14 cores (six for performance and 8 for efficiency) with a maximum operating frequency of 4.7 GHz, 24 MB cache, and 45W base operation (115W maximum).

This processor supports up to 64 GB of RAM. In our configuration, 32 GB of DDR5 memory has been enabled in addition to having a 1 TB M.2 SSD, with remarkable performance: