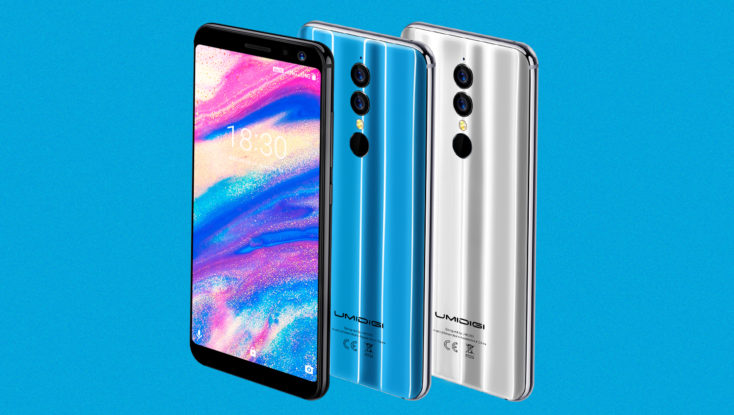 Like the latest UMIDIgi models, such as the UMIDigi S2 Lite, the phone comes in a black cardboard box with the brand logo in the center. Below we have the main features of the device.

The terminal comes in the upper part protected by a transparent TPU cover. Below is a tiny envelope with the card slot key and a mini manual. We also have the European power charger with 5V and 2A output. It also includes a red micro-USB type C cable.

Something that characterizes UMIDigi a lot is the careful design of its terminals. In this case, it is a terminal with a great design that is very careful and especially beautiful. It retains the same features as its predecessor and is made of aluminum alloy, which gives it an exquisite appearance. This is a unibody terminal, so the battery cannot be accessed without the proper tools. It measures 69.1 mm high x 145.3 mm long and 8.5 mm thick, weighing 191 g.

In addition, it makes good use of the spaces, and the practical screen surface is 77%. Navigation buttons will appear when needed. Above is the camera.

The rear area has a smooth metallic finish with a dual camera in the center. Add a small flash, and the fingerprint sensor works well below that.

On the right side, you have the volume up and down buttons and the power on and off. On the left side, it is entirely free, and the slot for nano-SIM cards is at the top. In this case, you can add two nano-SIM cards or use one of the compartments to include a micro-SD memory card.

The lower part has the speaker, microphone, slot for the micro USB cable, and the 3.5mm Jack connector for the headphones.

This UMIDIGI is a primary terminal that can be found for €90 if you bring it from China. Its processor is a MediaTek MT6739 with four cores and works at 1.3 GHz speed. It is a 64-bit ARM Cortex-A53 structure processor and an IMG PowerVR GE8100 graphics card with a maximum speed of 570MHz. In addition, this UMIDigi incorporates 3GB of LPDDR3 RAM.

And to check the overall performance, we have subjected it to the 7th version of the AnTuTu test, giving us a value of 45,110 points, confirming that it is a basic range mobile.

In daily use, the phone does not stand out for its speed; even so, it has not given problems with Internet browsing or social network applications.

On the other hand, I was subjecting it to a little more stress if I noticed any more problems. For example, when playing, I have seen many performance problems, “lag” (waiting time), and heating in the rear area. On the other hand, playing YouTube videos has also overheated, causing the phone not to respond well when turning or pressing the screen.

This phone has 16 GB of storage, 11.74 GB for our use (removing the pre-installed applications and the operating system). It may seem like a small figure, but as we have already mentioned, you can also add a microSD card to expand the storage space.

The sound is pleasing. Hears properly. After measuring with a sound level meter application and the default ringtone, I have obtained a maximum of “76 DBS”.

This terminal has a dual primary camera. The first 13Mpx CMOS sensor and an aperture of f / 2.0.

The second camera has a resolution of 5Mpx. Its application is complete, and it has White balance adjustment, Autofocus, Digital Zoom, ISO adjustments… It also has the option to take a photo s panoramas and the possibility of taking out of focus (bokeh effect). It does not have an HDR filter.

The selfie camera only has 5 Mpx with an f/2.4 aperture.

The maximum quality of the video is in Full HD.

Unlike many other phones, this one already comes with the operating system updated to the Android 8.1 Oreo multilanguage version and is completely clean since it is pure Android. It has all the Google services, including the Google Play applications, Gmail, and the Maps application. Being a “stock Android” version, it also adds the usual apps that come with Android: a file manager, a “Mail” app, a calculator, a “sound recorder,” and a music player. The main settings menu also has the function of scheduling on and off and, increasingly common, facial unlocking that surprisingly works quite well (without being the same as the iPhone).

The facial unlocking that it incorporates is the one that Android 4.4 brought, which is quite fast. However, it must be considered that it is not very secure since it can be unlocked with a photograph.