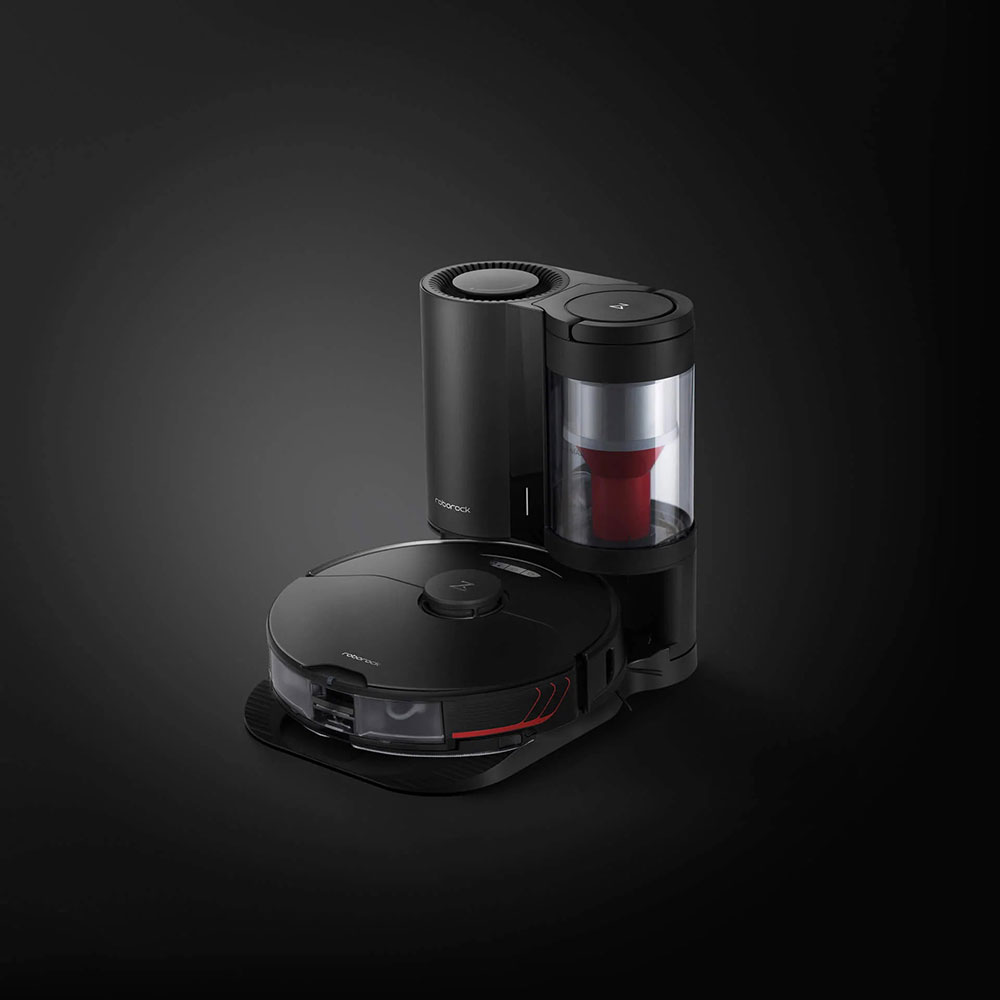 Few aesthetic novelties in this Roborock S7 MaxV compared to its predecessor, the Roborock S6 MaxV, apart from minor details or aesthetic elements, such as the fact that this latest version has a matte finish (the previous one was shiny) that makes it look elegant and that it better supports manipulation with the hands, in that the fingerprints are less noticeable.

Thus, in the upper part, we find the “beret” where the laser sight is located, an LED that lights up in different colors (pay special attention to when it is red or purple), and a door that opens upwards to access the solids tank, an LED light that glows green when the robot is ready to go into action and three buttons:

The front features a double lens – RGB camera – whose mission is to recognize objects to avoid them and a protector against possible shocks. If we turn it around, we will find familiar elements, such as three wheels to move the robot, the anti-fall sensors, the load plates, and the brushes.
Roborock Roller

The Roborock S7 MaxV has a side brush with five tips and a rubber roller, a material especially suitable for catching hair.

The Ultra base is spectacular but not made for small floors.

Although you can buy the robot with the base that comes by default (compact, with an adhesive to fix to the floor and with a translucent plastic mat to avoid damaging the floor when we use the mopping accessory), we have tested the Ultra model, which includes the spectacular 3-in-1 self-emptying base. First of all: it is not a base for small floors.

Self-emptying bases tend to be bulky, but this one takes the cake: it does not have one column but three. The first hides the bag in charge of accumulating the garbage from the tank, the second is a water tank to fill the robot before washing, and the third is dirty water.

From dirty water? But is he scrubbing the old-fashioned way, with a bucket that gets dirty? No. The idea is that before starting to mop the floor, the robot vacuum cleaner cleans the mop (which, on the other hand, tends to be very dirty as soon as you use it a couple of times). The manufacturers indeed recommend washing it often, but the reality is that sometimes we remember it when it starts to smell.
Base

This is smart navigation

Today the mid and high ranges of any manufacturer of robot vacuum cleaners have an “intelligent navigation” system, which is either a laser viewer or a camera or, increasingly, a combination of both. From a model with “intelligent navigation,” you can expect not only not to get stuck or get lost but also not to go around too much.

After framing the current scenario, let’s talk about the Roborock S7 MaxV. It has ‘Reactive AI 2.0’, the evolution of the ‘Reactive AI’ we saw in the Roborock S6 MaxV, giving us so much play. In practice, it is a combination of an RGB camera and a laser sight with a brain in the form of a processing unit for orientation, navigation, and object recognition.

This second generation theoretically recognizes what it sees on the floor to recommend cleaning patterns. So, for example, you can choose an ideal room cleaning sequence based on what you find.

Considering that it has a working camera, privacy comes to the fore. According to Roborock, the images are processed inside the unit, and it has a cybersecurity certification from TUV Rheinland.

Let’s start with the positive. The navigation is very refined, so much so that I would say it is the fastest robot that has cleaned my entire house. In addition, he is moderately good at dodging obstacles and reading terrain, so he usually gets in between the legs where he can fit. For this mission, light close to the cameras that improve lighting and thus improves recognition comes in handy.

If you look at the application map, you will see their passes and the obstacles detected. Thus, he has succeeded in catching the living room, the dining room table, one cable or another, the scale, and the house slippers. However, everything else is included in the obstacle item: the curtains, other wires, and a loose chair.

Another extra consequence of this navigation combo is that the map’s distribution of rooms is practically perfect, with hardly any editing required. This is helped by “clues” such as identifying the scale in the bathroom, the bed in the bedroom, or the dining table in the living room.

It is also interesting, especially if you live in a chalet or similar within or from the application; you will see that in the Manage maps option, you can select that your home has several floors, which will allow you to save several maps.

Without being perfect, navigation is the most reliable and efficient that we have tested.

What does it do when it detects an obstacle? Stand a couple of centimeters away without touching it and vary the trajectory. If the previous generation caused us doubts by running over some other rolled-up black sock emulating dog excrement, here it has come out victorious from the tests we have put on it.

In my weeks of use, it has rarely gotten stuck or lost, but never say never: I have found it standing in the middle of the corridor, caught on a cable, and run over a curtain dragging on the floor. Although it goes relatively thin, objects like the skinny black and white wire of the alarm clock and the almost translucent curtain in the bedroom are pretty thin and delicate. My impression is that depending on the size, light, and environment, and there is still an odd accident.

Another curiosity: in the application, you will find an icon with a camera that allows you access to what the robot vacuum cleaner is seeing in real-time. Of course, to alert possible people who may be recorded without realizing it, the robot changes the front light to a purple color and emits a warning phrase.

If you pay attention to the manufacturers’ recommendations and clear the cleaning area, you heal in health. In short: without being perfect, it is one of the most reliable and efficient that we have analyzed, ideal for cleaning quickly or by rooms.