Ingenuity: this is the Perseverance drone that will soon cross the Martian sky 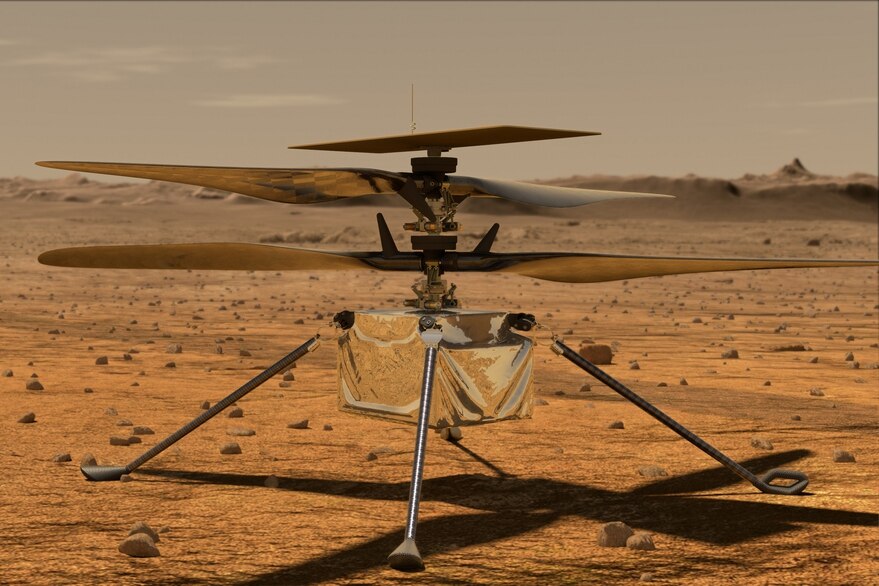 It will be the first time that a flying device has been deployed outside of Earth; in this case, a helicopter with redesigned blades for the Martian atmosphere

Last week the Perseverance rover arrived on Martian soil as part of the mission to Mars 2020, something spectacular. On Thursday, February 18, 2021, a vehicle weighing around 1000 kilograms landed that was deposited by NASA’s sky crane, a component to which it was attached through cables, which were released when the machine touched the surface. .

This mission is very special for fans of unmanned vehicles. A drone will emerge from the belly of the Perseverance rover, which in 30 suns (as the Martian day is known), will begin to function. The Ingenuity, as this 1.8 kilogram device is called, is designed to mark a new milestone in the history of unmanned aviation on a planet or celestial body beyond planet Earth.

This NASA helicopter has traveled to Mars with Perseverance and is also part of the Mars 2020 mission. Its objective is to obtain information aimed at demonstrating the viability and potential of heavier-than-air vehicles on the Red Planet.

According to NASA, the drone will operate autonomously in flights of about 90 seconds and a few meters, since it is not possible to carry out the mission in real time as if we had a mini-control station as when we operate one of these vehicles on Earth. Between planet Earth and Mars there are about 20 minutes of difference and the connection is not so fluid. As stated by the Jet Propulsion Laboratory, the scientists of the North American space agency will be in charge of sending the instructions for the Ingenuity to carry out an autonomous flight without the need for a remote operator in constant control of the aircraft.

Its fuselage is the size of a baseball, and its blades will spin 10 times faster than a helicopter on planet Earth. Thus, while the blades of a ground helicopter rotate around 500 revolutions per minute (rpm), the propeller system of the Martian drone will show a speed between 2600 and 3000 rpm, which is incredible for a helicopter, but not so much for a drone. land, whose rotor system even exceeds that speed.

The reason why the double-bladed system of the Martian drone rotates like this is because of the thin Martian atmosphere, equivalent to 1% of the Earth’s atmosphere. Thus, the rotor of the drone needs to rotate faster to generate more air because on the Red Planet there is an equivalent density on Earth to place the drone at an altitude of 30,000 meters above sea level.

In turn, the drone will fly in different missions, which will increase in intensity. It is estimated that the drone will ascend up to 5 meters above the Martian soil, without prejudice to the fact that they may later expand the vehicle’s maneuvering frame.

The Ingenuity comes equipped with batteries capable of storing enough energy for about 90 hours, a duration equivalent to the battery of three smartphones (although some may last longer in standby mode). It also has solar panels to help it store energy, which must be used intelligently by the drone.

Due to the cold temperatures that exist on Mars, the drone will need to dedicate about two-thirds of its battery to keeping the hardware that makes up its equipment at a temperature that allows the maintenance and optimal operation of its components. We are generally talking about -90 degrees Celsius, so the precautions that scientists who have developed this ingenuity must have been maximum. The other third of the energy generated should be dedicated to running the Ingenuity.
Settlements on Mars and the Moon?
Its mission is to demonstrate that it is possible to fly on Mars. In addition, you can take a photograph or image derived from the telemetry that you send. But what is certain is that if the drone proves that it can fly on Mars, there will be numerous unmanned missions to the red planet that will feature drones.

All this to the point that, when the fluidity of communications improves even more, we will be able to direct a drone on Mars from Earth. Surely, in the same way that they are already raising the questions that are necessary to implant the Lunar Gateway, that is, the lunar space station, we could soon have the first interplanetary internet. In fact, internet domains .mars are already being considered

The settlements on Mars are currently on the table, and the private initiative sees these planetary projects as a source of great economic potential. The space industry has served to simultaneously project the advancement of medicine and also the development of new technologies that today are part of civilian use.

Today we must ask ourselves what legislation should be applied, since the international instruments that we have call for a change. Thus, the so-called principles of satellite remote sensing or Remote Sensing of Earth from Outer Space could no longer be applied precisely because the title of the soft-law standard is clear. therefore, we would need some principles of Martian remote sensing.

The space race has accelerated almost like this beginning of the year 2021. Three space missions are already looking at Martian soil in February, either from space (the United Arab Emirates “Hope” mission), almost touching Martian land (the Chinese mission Tianwen-1) or already fully in it (Perseverance). All this points to Mars as a new destination for humanity in a very few years.