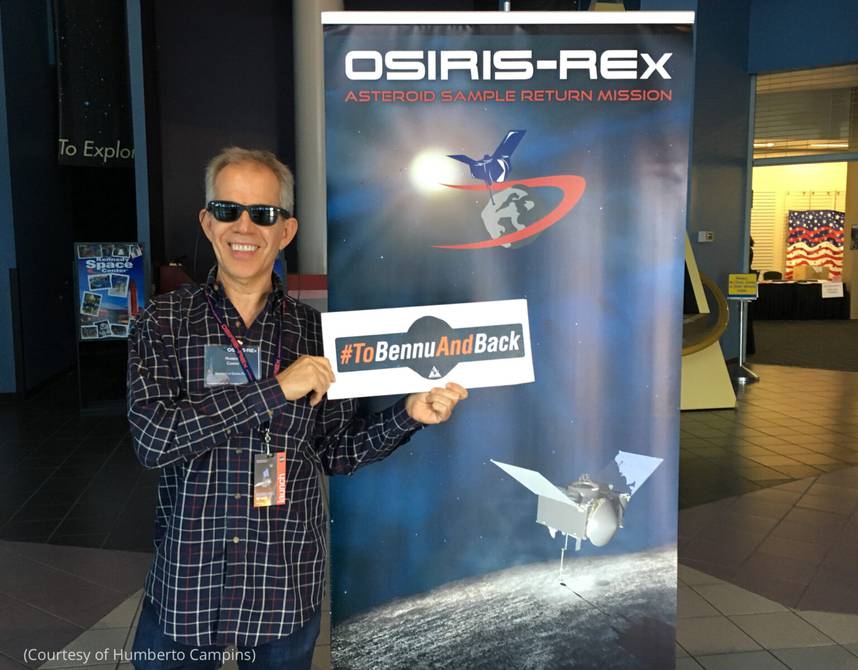 Bennu is an asteroid near the Earth of about 490 meters in diameter and a mass of 6 × 10¹⁰ kg. Its maximum approach to the Sun is within the orbit of the Earth and its maximum distance reaches almost the orbit of Mars

Among the architects of one of NASA’s greatest scientific feats, the collection of samples from a moving asteroid, is an American, a Venezuelan immigrant, who came to the United States to make his dream of life come true.

Last October, the NASA OSIRIS-REx [Origins, Spectral Interpretation, Resource Identification, Security, Regolith Explorer] took a sample of the asteroid. Bennu, the smallest object that a spaceship has ever collected a sample of.

Humberto Campins was born and raised in Venezuela, and since childhood he has liked astronomy. He commented that when looking at the night sky, he had the feeling that he was very beautiful and there was a lot to learn.

When it came time to go to college, there was nowhere in Venezuela where Campins could specialize in astronomy, so he immigrated to the United States. He graduated from the University of Kansas in 1977 and received a doctorate in planetary science from the University of Arizona. He obtained American citizenship in 1989.

Campins spent several years researching and teaching astronomy until he joined the faculty at the University of Central Florida (UCF) in 2002. In 2010, NASA selected Campins as a member of the science team for the OSIRIS asteroid sample return mission. -REx.

He remarked that he wasn’t even entering into his wildest goals to be part of a NASA team that was going to send a spacecraft to an asteroid and bring back a sample.

Campins worked with rocket scientists and other imaging specialists to understand the geographic landscape of the asteroid Bennu.

The mission required the OSIRIS-REx spacecraft to touch the asteroid using a 3.4-meter mechanical arm with a small head designed to collect the sample. The spacecraft made contact with Bennu for about 5 seconds.

Ground conditions were so favorable during the October 2020 mission that the probe picked up more than NASA’s target. The probe is scheduled to return to Earth in September 2023, when researchers will be able to analyze the samples.

Campins’ research on imaging at UCF is funded by both NASA and the National Science Foundation.

Campins is also part of the 2021-2022 Jefferson Science Fellows Program, which will support his ongoing research on astronomy. The program is administered by the National Academies of Sciences, Engineering, and Medicine and is supported by the Department of State and the United States Agency for International Development.