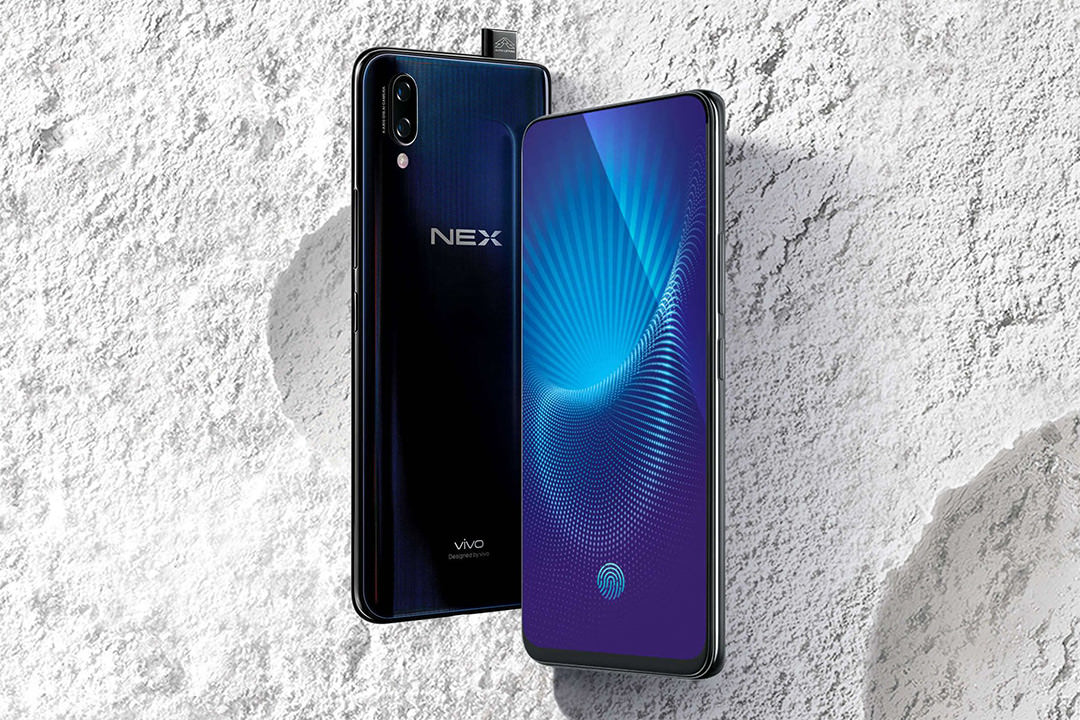 This Vivo NEX S has hardware that will sound a lot to us, and that is that all the big brands mount the same components in their flagships. One of the last ones that passed through the office with the same processor and camera sensor was the Xiaomi Mi8 that I leave you here for your review in case you want to compare them.

This smartphone comes in a square black box, with the brand of the terminal and the logo of the 2018 World Cup in Russia at the top, inside the silhouette of a Vivo NEX S. Many of you may wonder what the World Cup has to do with it. Of soccer with this smartphone, however, it was one of the most important sponsors of the event.

On the back, it has a couple of QR codes, the model of the terminal, the frequency bands used by 4G, and a sticker with the IMEI numbers.

Inside the box is the smartphone, and as a drawer, another box is pulled out where the accessories are. Inside this second one, there is a black hard case, several manuals and getting started guides in Chinese, a “skewer” for the nano SIM card tray, the 5V to 2A Chinese version charger, the USB to USB type C cable, and a traditional headset with a 3.5mm audio jack.

I had never had a Vivo brand device in my hands, and seeing how complete this smartphone comes with all the accessories, it is a detail that we must thank the manufacturer for. Not all brands include cases or earphones. In addition, another point in favor is that, despite being Vivo’s most powerful smartphone, it incorporates a 3.5mm headphone jack.

With an extensive design, this Vivo NEX S has competed with the highest-end smartphones, such as the Samsung Galaxy S9+, the iPhone X, or the Huawei P20 Pro. The quality of the materials and the futuristic design are so elegant that it makes you die of envy and make you dream of being able to have it.

It is made of aluminum alloys and a back that attracts attention due to its small glosses, making you see nuances of colors and never see it in the same color.

Despite being a screen-only smartphone, the Vivo NEX S is not small in size; quite the opposite. It is tremendous and has dimensions of 77 mm long x 162 mm high x 8.5 mm thick, weighing 199 grams. The first time I picked it up, it was too big for me. As I was using it, I got used to its large size, coming to love it.

It has a fantastic 6.59-inch Super AMOLED screen and a Full HD+ resolution (2316x1080pixels). The screen is of the highest quality; the colors are authentic and have a lot of brightness. On clear, cloudless days, under sunlight, you can see the intensity of the screen in unbeatable detail. The density of pixels per inch is 388; despite being a screen-only smartphone, the valuable surface is 86%.

As I have already mentioned, the front part is all screen; therefore, we have practically nothing in sight. Thanks to the terminal guide, we know that it has a light sensor under the screen, which regulates the intensity perfectly. It also has a speaker for calls under the screen, and I have to say that I have not noticed any difference compared to any other smartphone; it sounds excellent. Finally, the on-screen fingerprint reader is also very new, and that very few manufacturers have managed to implement it today. However, despite being unique and practically no smartphone has this system, I wouldn’t say I liked it too much. I have had to configure the same fingerprint five times for the sensor to unlock it quickly and comfortably. Even on some occasions, I have had to enter the unlock code. I think they should continue working on it, and that for now, and despite being a clear defender of fingerprint sensors on the front, they should put it on the back.

The lock button and the typical volume up and down button are on the right side. On the left side, and to my surprise, since it is not usual, there is a button to activate the “Jovi” personal assistant, which we can only use if we master “mandarin.”

In the bottom center, you have the USB type C. On the right, you have the speaker, which sounds good. On the left side are the microphone and the band.

We have a 3.5mm jack audio input on the upper side and a noise-canceling microphone. We also have a tiny slot where the retractable selfie camera is hidden.

The dual primary camera is placed vertically on the back of the device, in the upper left corner. Beneath this is a dual-tone dual LED flash.